Blood Calls To Blood is the eleventh episode of Shadowhunters: The Mortal Instruments.

THE TRUTH WON'T ALWAYS SET YOU FREE: With the help of a new ally, Clary and Jace attempt to rescue Jocelyn.

After receiving important intel about Valentine from a surprising ally, Clary, Jace and Luke devise a plan to rescue Jocelyn. With the mission looking almost impossible, the three will stop at nothing to rescue Clary's mother and put a stop to Valentine once and for all.

Meanwhile, Inquisitor Herondale arrives at the Institute for Isabelle's trial as Alec turns to Magnus for help. 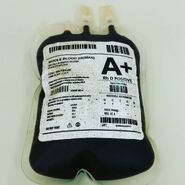 Add a photo to this gallery

A list of the songs and score music featured in this episode:

The following are references or elements from 'The Mortal Instruments':

Retrieved from "https://shadowhunterstv.fandom.com/wiki/Blood_Calls_To_Blood?oldid=26347"
Community content is available under CC-BY-SA unless otherwise noted.